Cambodia officially known as the Kingdom of Cambodia and once known as the Khmer Empire, is a country located in the southern portion of the Indochina Peninsula in Southeast Asia.

Cambodia’s ancient name is “Kambuja” In 802 AD, Jayavarman II declared himself king and marked the beginning of the Khmer Empire which flourished for over 600 years, allowing successive kings to dominate much of Southeast Asia and accumulate immense power and wealth. The Indianized kingdom built monumental temples including Angkor Wat, now a World Heritage Site, and facilitated the spread of first Hinduism, then Buddhism to much of Southeast Asia. After the fall of Angkor toAyutthaya in the 15th century, Cambodia was then ruled as a vassal between its neighbors.

Morning: Up on arrival at Phnom Penh International Airport, our guide will welcome and transfer you to the hotel for check in. Enjoy lunch at local restaurant.
Afternoon: After lunch, we start to visit National Museum, the largest museum in Cambodia storing over 14000 items including sculpture, ceramics, bronzes, and ethnographic objects. Continue to Royal Palacewas constructed in 1866 by King Norodom to serve as residence of Cambodian King, his family and foreign dignities. Near to the Royal Palace, we can visit Silver Pagoda make up of 5000 silver tiles. There are hundreds of royal gifts inside the pagoda which received by Royal Family over many years and a solid gold Buddha with 9584 diamonds weighing 90Kg and a small 17thcentury emerald and baccarat crystal Buddha. There after we, drive to visit a small hill of Wat Phnombuilt in 1434 by a wealthy lady named Daun Penh. It is the legendary founding place of Phnom Penh city nowadays. The hill is the site of trekking to the top and elephant riding on the bottom. Enjoy dinner at local restaurant and overnight in Phnom Penh.

Morning: After breakfast, we drive to visit Genocide Museum Tuol Sleng, a former high school converted into S-21 prison during Khmer Rouge came to power in 1975. It is now serves as museum and memorials with some photos and paining of the victims during Khmer Rouge Regime. Continue to Killing field Cheng Ek, the site of brutal exclusion of men, women and children under suffered torture and interrogation. Currently, Cheng Ek is the memorial mass graves, killing area and stupis containing thousands of human skulls and bones. Enjoy lunch at local restaurant. 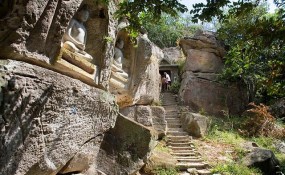 Morning: After breakfast, we drive 168 Km to Kampong Thom Province. Along the way, we stop to visit Kuhear Nokor temple which located 100Km from Phnom Penh city. Then continue to Kampong Thom province. Up on arrival, check in at hotel and enjoy lunch at local restaurant.
Afternoon: After lunch, we start to visit Sambo Prey Kuk located about 25Km northeast of town. The temple was built of solid brick, laterite and sandstone with bas reliefs. It was once the old capital named Isanapura and a worship of Shiva Brahmanism. The site consists of Lion temple,Neak Pean temple and Krol Romeas temples. After walking around the site, we return back to town for dinner and overnight in Kampong Thom. 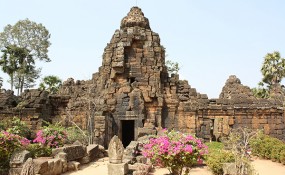 Morning: After breakfast, we drive to Siem Reap province. Along the way, we stop to visit ancient bridge built in the 12th century which located near the road between Siem Reap and Kampong Thom. The bridge has 75 meters long and 14 meters height up the stream. It is currently not allowed for heavy vehicle to travel on this bridge. Then check in at hotel and enjoy lunch at local restaurant.
Afternoon: After lunch, we visit Takeo temple, a pyramid five levels temple with total height of 40 meters. This temple was built with the biggest blocks of sandstone in Angkor time dedicated to Shiva. Then ride oxcart to visit the living jungle of Ta Prohm, a large temple with big fig tree growing on the top towers and corridors offering a jungle atmosphere and some of the best tree in temple photo opportunities at Angkor. It was built in mid12th to early13th century (1186) by king Jayavarman VII which dedicated to his mother. After that, continue to Banteay Kdei temple, a Buddhist temple located southeast of Ta Prohm and the east of Angkor Thom . The temple was built in the Bayon architectural style with the similar plan to Ta Prohm and Preah Khan, but little complex and smaller. It was constructed during the reign of Jayavarman VII in mid-12th to the early 13th centuries. Thereafter, we continue to Sras Srang located in front of Banteay Kdey temple. Sras Srang lays a fantastic of 700 by 300 meters wide, built in mid-10th century and remodeled in late 12th century as a water reservoir. We continue our visit to Krovan temple, located in the east of Angkor Wat anad south of Banteay Kdei temple. It was built and completed during King Harshavarman 1st dedicated to Vishnu & Lakshmi. After the entire visit, we enjoy dinner at local restaurant and overnight in Siem Reap. 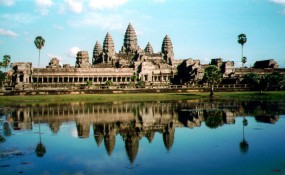 Morning: After breakfast, we start to visit Angkor Thom. It is the last capital city of Angkorian Empire built by Jayavarman VII as his new capital city after he recaptured Angkorian capital from the Cham invader in 1181. He began to build the existing Baphoun, Phimean Akas temple and enclosed city with outer moat around them. We continue the trip to visit Phimean Akas Temple, the tallest temple in Angkor Thom which provides nice view from the top. It was built as Hindu temple which is surrounded by five meters high wall. Thereafter, we visit the Elephant Terrace and Leper King Terrace. They form 500m long platform crossing the east side of Royal Palace in Angkor Thom with incredible sculptures and carving of Airavata, Indra Three Head Elephant , five headed horse Balaha and impressive array of Garuda bas reliefs. They are very important places for any tour in the city of Angkor Thom. Then return to town for facial scrub, body massage or foot massage for 90 minutes. It is depend on your choice. For those are not interested in spa, we will take you to visit Artisans D’angkor where you can buy souvenir for your friend or family. ArtisansD’angkor is a project created in 1999 to help young poor people to learn by doing on traditional craft skills (stone and wood carving, lacquering, gilding and silk processing, polychrome products, silver plating and silk painting). Then do some shopping at old market. You can visit or buy many kinds of souvenir including silks, silver, jewelry, some antiques, clothes, shoes, household items, hardware, and fresh food. Come back to pick up the group at Cambodia's top spa boutique then enjoy lunch together at local restaurant.
Afternoon: After lunch, continue to visit Angkor Wat temple. It is the largest monument in Angkor and the best architectural masterpieces with the perfection of composition, balance, reliefs, and sculpture which make it one of the finest monuments in the world. Enjoy dinner with Apsara show at local restaurant and overnight in Siem Reap.

Morning: After breakfast, we start to discover Banteay Srey temple built by Brahmin counselor under powerful king Rajendravaran and later by Jayavarman V. The temple consists of finest classical Khmer art covered with the most beautiful carvings. Continue to Banteay Samre, was built in the middle of the 12th century by king Suryavarman II dedicated to Hindu with Angkor Wat art style. Enjoy lunch at local restaurant
Afternoon: After lunch, we explore Prerup temple built during the reign of Rajendravarman serve as the state temple of the capital. It is best example of mountain temple style on a grander scale than the East Mebon. Continue to small temple of Tasom built at the end of 12th century dedicated to DharanindravarmanII. The temple consists of shrine surrounding by enclosed laterite walls. Then, we visit Neak Pean temple, a small circuit island in the center of the large pond. The temple is consisted of small elephants sculptures in the round stood on the four corners. After the entire visit, we enjoy dinner at local restaurant before going back to hotel.

Morning: After breakfast, we drive to Kulen Mountain National Park with 487 meter height to visit 1000 Lingas River carved under water current and reclining Buddha carving on the hill. Enjoy lunch on the top of mountain.
Afternoon: Relax there with waterfall and fresh air before we return to town. Enjoy dinner at local restaurant and overnight in Siem Reap

Morning: After breakfast, you will learn Khmer Cooking Class with 3 types of Khmer typical dishes. Before the courses start, we go to local market to buy fresh vegetable and ingredient with our experienced chief. Spend your whole morning to learn about them and serve your own food for lunch.
Afternoon: After lunch, we start to visit Tonle Sap Lake, a unique ecological hotspot and the largest fresh water and the richest fishing lake in Southeast Asia. Continue to visit Chung Kneas Floating villages located on Tonle Sap Lake where you can see floating houses, schools, churches, shops and farm. We stop to visit fish and crocodile farm and do some souvenir products there (please check the product carefully before buying them. We are not responsible for any problem with your product).

Morning: After breakfast, free at your own leisure until time transfer to airport for departure flight. End of tour with enjoyable and memorable experience.

We are a member of